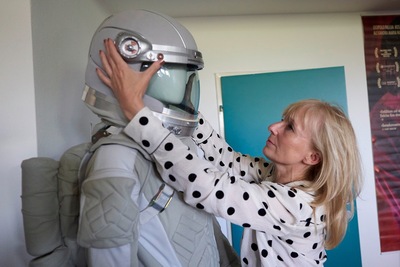 Monika Buttinger, born in Wels in 1971, started to fullfill her dream of becoming a costume designer with 14 when she attended the HBLA for artistic design in Linz. After that she got her degree as a fashion designer at the fashion school in Hetzendorf / Vienna in 1995 and immediately started working as a costume and fashion designer for different theatres and fashion labels . Since 2000 she works as a costume designer for feature films. For the costume design of VOLLGAS she won the Femina Award at Max Ophüls Festival for an outstanding artistic performance behind the camera followed by several awards in the last decade. So far her costume design portfolio includes more than 55 feature films showing an interesting range of mostly arthouse like: THE GROUND BENEATH MY FEET (Berlinale competition) or REVANGE (Oscar nominated), period films such as THERAPY FOR A VAMPIRE and feature films like IM WEIßEN RÖSSL.

Monika is based in Vienna and Berlin